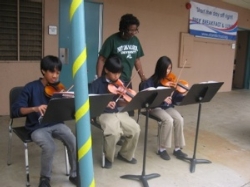 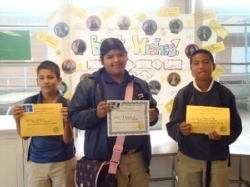 In reviewing its mission, Hands United for Children's Board of Trustees set the goal of assisting a domestic U.S. school to develop facilities and programs for less privileged children. A sideline discussion between soccer dads about education began the process of exploration leading to our selection of the The O'Farrell Charter School as Hands United for Children's domestic education project for 2012 and beyond.

The O'Farrell School's unique vision and situation fit perfectly into the goals of Hands United. Namely, they are determined to provide a top education to students who are frequently left behind in the American educational system. The elements which led us to select O'Farrell are as follows.

Poverty is the major challenge facing the school. Over 80% of the students qualify for free or reduced lunches. O’Farrell has a attendance rate of approximately 12% foster/homeless – this is the second highest foster rate in all of San Diego County.  Nearly 15% of the students live in either a foster care setting or with adults other than their biological parents and this percentage has been increasing over time.

O’Farrell has a higher than average special needs population at 12.5%. An additional challenge is the diversity of the population: 30% African American, 24% Filipino, 36% Hispanic, 4% Indochinese (primarily Lao) and 2% White. A number of these students lack sufficient English skills to immediately succeed in their studies; over 23% are identified as English Language Learners.

With all these obstacles, O’Farrell still out-performs the schools in the area. The school's mascot provides the metaphor for how O'Farrell achieves excellence - the FALCON Way describes the habits and character traits that students must attain to achieve high academic standards and demonstrate appropriate social and emotional growth during middle school. The word FALCON is an acronym to identify the key character attributes necessary to succeed in school: Focus, Attitude, Leadership, Citizenship, Organization, and Non-violence.

O’Farrell’s vision utilizes a student-centered, activity-oriented learning program with state-of-the-art technology and committed community participation. As proof that it works, last year O’Farrell added a ninth grade and the success of its students was better than many of the schools in the area, even in the more affluent areas of town. The expansion of grade levels to K-9 will help O’Farrell prepare students for a college preparation curriculum in high school.

The Need for a High School

Students leave O’Farrell with average to good grades but fail at the high school level. Lincoln High School, for example, is near capacity; a major motivating factor for developing the high school at O’Farrell is that Lincoln is one of the poorest performing schools in all of San Diego.  Only 16 percent of seniors graduate with the A-G requirements (2011).  This means that only 16 out of 100 students can attend a four-year university.

It requires time to instill in students the confidence to know that attending college is an achievable goal. The same rationale drove the decision by O’Farrell to add a ninth grade program in 2010-2011. Some students are not ready to move on to a high school environment after the eighth grade due to academic needs, social development or strength of study skills as an autonomous learner. The goal is, by September 2012, to add a K-5 and in 2013 a high school with expansion to grade 12 by fall 2015.

How You Can Help

Building a high school requires major funds.  O’Farrell has already secure 75% of the funds, and, working with the school administration, Hands United For Children has committed to engage the San Diego community to assist and provide the remaining 25% to complete the project by 2015. We encourage you to contact us to learn more about how you can get involved, either through much appreciated monetary support or more directly through joint programs between Hands United and O'Farrell.